The MKS DS6100 is specially optimised for glider fliers, with excellent torque and precision, and a very low deadband. It is a very high torque thin 9.5g servo suitable for many wing and fuselage applications. It has more torque and a better geartrain than all other servos of this size and price range.

At only 10mm thick this superb wing-servo can easily fit in thin wings. but with a low height of 23.5mm it can also fit in small DLG and other fuselages. With good 3.3 kg.cm torque and a reasonably good 0.12s/60° speed it is excellent for flaps, ailerons, elevator and rudder on many high performance gliders, DLGs, electric gliders, and faster sport slopers.

Excellent flap servo for a FJ5 glider with huge flaps like mine, very strong pull. Perfect for the job.

Big Quality at a resonable price

this is now my go to servo. well priced good quality and does not buzz like some! Great service from Hyperflight too!!

Such a versatile servo Small but powerful with excellent centering

It fits exactly in a RCRCM Tomcat for rudder and elevator they are working very smoothly. Excellent service, very fast delivery.

first time purchasing Mks servos. these were installed in the elevator for a L213a. really happy with these. a good combination of small size and performance. recommended as per most other reviews. Also great service from hyperflight

Fits nicely in the flap wells of my 4m Enigma, and are very smooth, just like the service from Neil!!!

When I had a problem with a DS6100 I was very relieved Hyperflight stock them as practically nothing else would do. A great little POWerful servo.

These are excellent precise servos with really good centering. I am using them to drive the ailerons in my 3.8m F5J Explorer Q. The ailerons are really big, but it seems to work very well using the smallest size servo arm 3.5mm (!) with the Servorahmen IDS. Gives plenty of travel, even with such a small servo arm.
4 Stars only because they do not work down at 1S lipo voltages, in fact not below about 4.5V. I am using them with BEC voltage of 5.3 to 5.5 V with no problem.

Really quick response on my latest order, as always! Thanks Neil.

MKS DS6100 Servo - 10mm 9.5g 3.3Kg.cm.
I live in Japan.This servo cannot be purchased in Japan.
It is a fast and sincere good shop. United Kingdom of Great Britain and Northern Irelandis a wonderful country.
I want to leave the EU and join the TPP. The EU only benefits GermanyI think so.
Anglo-Japanese Alliance again.

Excellent service. The only servo to choose when installing elevator servo in fin, due to size, weight and quality.

Prompt delivery by Neil for a returned Bluebird servo. These are very strong and reliable servo and recommended for thin wing moulded gliders. This was a replacement for an existing DS6100 which did fail in a hard landing (stripped gear and failed motor) so nothing is bulletproof but happy to replace with the same make.

Great performing servo fast accurate powerful and lite. This servo fitted perfectly into the fin of my Schwing keeping the weight to a minimum and not effecting the CG too much. As usual very quick delivery and great service from Hyperflight

Excellent service from Hyperflight as usual and the
MKS DS6100 servo is just what I needed!.

Very fast service, I'm in the USA and purchasing and shipping was easy and fast.

everything ok. Shipment to Germany took about 1 week. Bad thing was, that the shipment was unregistered and therefor I did not get a tracking number.
regards
Ernst

These servos are now pretty much the standard go to servos for my F5j planes. Very light but plenty strong enough for both aileron and flap.

Great little servo with enormous power for its size.Not the cheapest but certainly one of the best. Usual great service from Hyperflight. Many thanks.

I use only MKS and Futabe Servos when I build up an expensive model. They are save and reliable. Esp. the 6100 is strong, precise and small.
For me the best choice for the most cases.

And I buy stuff at Hyperflight, cause prices for spares are ok, the availability- sign is reliable and the deliver asap. Also to Germany where I live.

I installed these all around in my Maxa light. they are good servos.
but after only few hours flap servos need to be replaced: gear is broken. I do not recommend those for big flap. Great service from Nail!

Strong and light, if you put in flaps of a big f3j or f5j glider this frames is a big help for the gearbox.

can not get full travel because servo arm linkage makes contact with case!

Fantastic little servo, have used a lot of different servos of this size over the years and none of them come close, there is no slop(backlash) whatsoever, speed and centering is better than anything in its class according to me.

The best servo of this size that I have found. I've used them since they came on the market and Neil gets them to me faster and cheaper than anyone here in the USA.

gears not so good

2 new gear sets had the same gear that could not be uses one pacage had bin open ??

This was a replacement for a DS 6100 on which I stripped the gears during a quite gentle landing.
Ordered replacement gears which Neil had to get from MKS. On arrival they didn't fit on the spline, so I cut my losses and replaced the servo.

Throughout, Neil's service was A1. Bit disappointed with the issues with such a premium product though - hopefully I was just unlucky. Thanks once again Neil

I used this type of servo for Flaps in my last model and have been very pleased with them. I am now building another model the same as the previous so have purchased this type of servo again. They are used on Flaps and Ailerons of the 2 metre Glider. Possibly overkill for ailerons but I regret not using them on the first wing as the cheaper servos that I used buzz even though they are lightly loaded.

By far the best of the sub-10g servos. Very powerful and very precise. The DS6100s are easily a match for most 25g servos.

I am using them for the tail surface servos in a 4m Maxa, and they easily handle the large rudder and full-flying stab.

Amazing servos in a tiny package.

Very small & light, yet strong and most of all: exceptionally precise! Great buy :-)

Good quality servos, bought four to use in the wings of a Sunbird 60.

I am utterly gobsmacked at these servos. The deadband is almost non-existent. One click of trim moves it, and one click back moves it back to the same spot. Makes setting up surfaces a pleasure.

Still to fly with them in my Prodij HM, so I'll update afterwards.

I replaced the aileron servos in my Notos with a pair of these (regretting my original choice!) and am very happy with the result. Really powerful, small, pretty light, centre perfectly and have no slop at all. Looking forward to getting them in my TopSky too.

I've used quite a few of these and found them to be accurate, reliable and very robust for their size. Service from Neil was excellent, thanks.

Decent power servo for its weight and dimensions. However, I had problems initiating the servo when powered with a castlecreations 10A BEC. Left aileron would not move at all while the right one was working ok. After a couple of restarts it would finally initialize.
I changed the BEC and everything is fine ever since.

Very pleased with the quality of this product. Extremely smooth action, good centering accuracy and very compact for it's torque. Even the plug has a satisfying feel of security when plugged in.

A minor but equally pleasing aspect is the quality of the packing that it comes in. This includes a firm foam that I felt could be used for mounting the servo in some situations.

I really like these servos. I use them for ailerons F3K models and for V-tail in F3F class models. I would recommend it

Not the cheapest servos around, but I have always believed you get what you pay for, small - light - powerful, would be nice to have side mount lugs as i like these for wing mounting for alierons

First class, speedy service which makes you feel you are dealing with conscientious people.

Used one of these as an elevator servo in my Fireworks 4.2. Excellent servo, gives movement resolution at the level of one digital pulse. Centers perfectly.

A very good servo - almost as good as the legendary DS6125... In my MAXA-4 I only have DS6125 and DS95, but in my Supra Pro Competition Spread Tow I decided to use only the DS6100 in the wings because of the weight. Vertical down from a height of 280m (vario measured) is no problem for the DS6100!

I bought the servo and I broke it. I asked twice about possibility to get replacement gears but this time the seller is not hearing me and I get NO reply.

I find this ignorance attitude not very appropriate.

HyperFlight Reply: We are very sorry, but we don't have time to answer every email. We did finally get back to you and do now stock replacement DS6100 gear sets.

Bought two. Great service and quick delivery. Servos are good. I would use this shop again. Thank you!

Ideal suggestion for my Blaster 3 thanks

I wanted to save a bit of weight in the tips of my Elektra 3.5mtr F5j model. I was going to use Hyperion DS09 which I know are sufficiently powerful . But was concerned that the gear train may not be robust enough to withstand the occasional sharp knock as I previously had one fail on the rudder of an AVA after I accidentally kicked it.As my ailerons do seem liable to receive sharp knocks, I thought the thicker and more robust looking metal used in the gear train of the DS6100 would be more suited to the job. I have mounted my servos into the wing with 30min epoxy after first wrapping them with heatshrink.

They are more than powerful enough, center perfectly and are very smooth in operation from one end of travel to the other.

It's too early to comment on wear/slop, and they do occasionally buzz (like all digital servos do), but so far they l look like a very good choice and I plan to retro fit them in my other F5j models, a lighter wingtip is always a good thing. 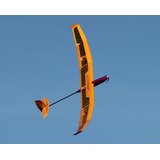 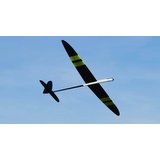 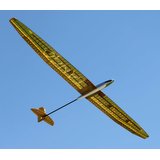 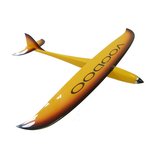 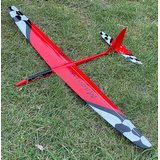 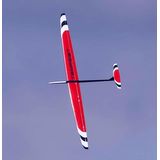 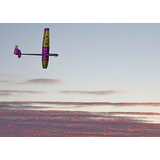 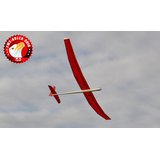 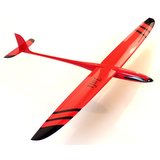 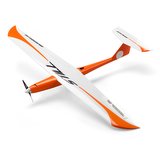 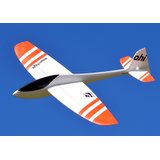 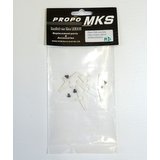 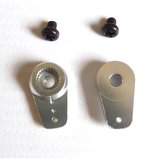 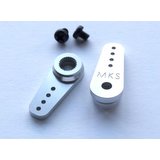 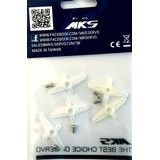 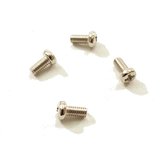 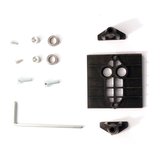 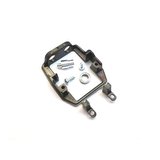 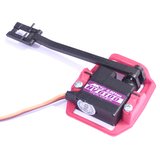 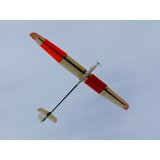 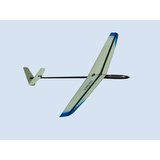 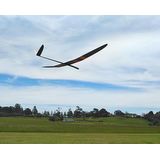 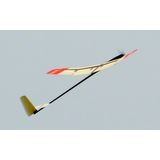 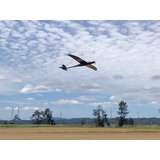