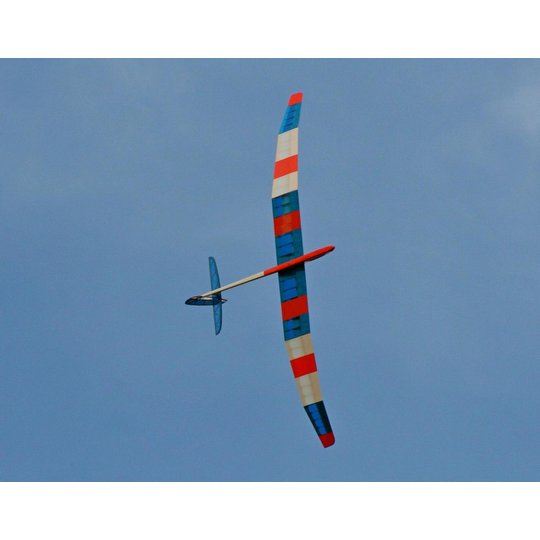 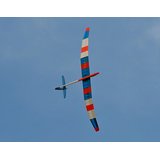 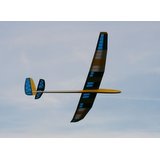 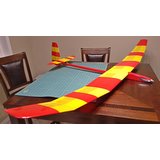 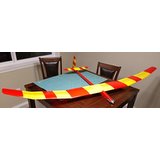 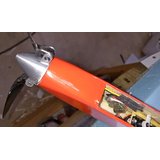 The X-RES Elektro is a built-up CNC cut balsa and ply kit. It is an electrified versdion of the X-RES glider designed for the new F3-RES 2m Rudder-Elevator-Spoiler glider class popular in Germany and Austria.

The X-RES Elektro is the latest development of Alois Janowetz, the designer of many top performing models. The X-RES Elektro has pleasant flight characteristics and brilliant performance. The model is very agile and extremely easy to fly. The sophisticated design and the brilliant use of weight-optimized materials allows a flying weight of 430g and thus a wing loading of only around 11 g/dm2 (3.7 oz/sq ft) out of the box, giving amazing performance.

The large 2-part spoilers allow almost vertical descents without an increase in speed. The wing separates into three panels and the tailplane is removable making the model very easy to transport.

The CNC cut kit has very simple and robust construction. With the exception of the 6 mm CFRP rods for the wing and the GRP rocker for the moving tailplane only selected and optimized balsa and plywood are used.

All components are bonded with easily available glue and the model's construction is simple, considering the excellent performance potential. The design allows the use of commercially available and easily obtainable components.

The kit includes a colour plan and comprehensive instructions. An English translation is included/available. For more info about the X-RES see this and this RCGroups build threads.

I'm returning to the hobby after my youth, radio gear is so sophisticated, robust & cheap! When I started I could only afford a 3-Channel radio set. Also, modern kits like this are a revelation after cutting out ribs by hand, and CA has made the build process so quick. I used to have to hold wings down on a flat board overnight while the PVA cured. Anyway, on Neil's recommendation I got my eye back in with a Big Vick then built this X-RES Electro. I made a few mistakes but was able to recover them, that's the downside of the speed of CA!
I learnt to cover with Oralight, a bit easier than tissue & dope.
AUW was 483g + 10g to balance. Not bad for a beginner.
Neil's service and advice goes without saying and is repeated in the many reviews here.
I started off with the CoG at 77mm which was a mistake and I struggled to get stable flight. Two heavy crashes and subsequent repairs later, I put 10g of lead in the nose to move the CoG to 73mm and it was transformed. I am now rapidly learning how to fly again and have installed a Vario to monitor my height.
A few points:
The plans provided were not for the Elektro so caused some head scratching. I got some great advice on the RC Groups forums, one guy in Greece even sent me a soft copy of the correct plans that I think he'd got from the designer.
I think the nose has been shortened too much from the pure glider to suit the latest lightweight motors and LiPo cells, I installed the servos right up under the leading edge and have a 2S LiPo pushed right up to the motor but still needed some lead. I would have preferred a longer nose and more flexibility with gear location to achieve the CoG. The guy in Greece who sent me the correct plans has built 3 of these as electrified glider versions, I might do this next.
The airframe is amazingly strong given its built up construction and spruce main spars. I crashed it heavily enough to break the nylon wing bolt but that only fractured the false leading edge and I was able to splice in a new section. There's a bit of filler and it's not as pretty as it was, but it flies!
For info I've installed the following:
Servos: 4 x Bluebird BMS-101DMG.
Motor: ADH300L / MM1914-1100 Front Mount 39g 1100 RPM/V
Prop: GM 9x5 + 30mm Spinner.
Battery: Overlander 850mAh, 7.4v, 2S, 35C Supersport Pro LiPo (Perfect fit in the fuselage).
ESC: Overlander XP2 20A Brushless Speed Controller.
FrSky RC Gear with RX6R Receiver.

Excellent kit - but beware small error in the English instructions. Taper the 2mm trailing edges on the bottom surface not the top. Info from Robert Zeller.

The skill and experience of the creator was tested rather than the workmanship of the kit ! I was happy when it was completed ! It's not a plastic model , so I think it's good ! But good quality is important !!!

Very nice kit but does help if you have built wood sailplanes before. X-RES is a great flying sailplane and I am looking forward to the convenience of an electric assisted launch. Service is the best!! Incredibly quick shipping.

This plane has been revued by many also see glided option. I can only add that it is certainly not up to the standard I expect from Hyperflight . Poor quality, and over priced I would not recommend.

X-RES Review.
The kit itself is well presented. I was pleased to see CNC routed parts instead of the charred edges and smell of laser cut which take a lot of sanding away or the edges show through any covering. Wood selection was excellent, very light but nevertheless fragile if mishandled. Take note!
Instructions were a very poor translation and not worth bothering with but give an order of assembly only. Use your own experience to build the kit. During the build I did spot a few errors on the plan, there are more formers to the fuselage than indicated and for some unknown reason the routed parts for one wing panel did not match the plan. If you keep your wits about you, interpret the photographs and think ahead the X-RES goes together without too much head scratching. However, the kit is obviously based on the pure glider version, adapted for electric power. Why different gauge pushrods for elevator and rudder are supplied beats me.
I hinged the spoilers with Litespan and the rudder with Kavan cyano hinges. To hold the outer wing panels to the central section strong Magnets were installed (not in the kit), which works fine for me, not being fond of tape on film. Wings, tailplane, fin and rudder were then covered in Oralight. The fuselage was finished with 25g/m2 glass cloth, applied with Poly C after an initial coat of sanding sealer and finally painted with Humbrol enamel to try and strengthen for the inevitable rigours of competition flying. Although commendably light, it seemed potentially fragile.
The motor was the ADH300L, on 2S, 850mA/Hr LiPo. Servos throughout were Bluebird BMS101AMG and radio Jeti. Flying weight came out at 1lb 2oz, (510g). How you hit 430g as advertised I am unsure unless that is the pure glider weight. A little lead in the nose was required even with the battery all the way forward. A 3S LiPo set up would perhaps obviate the need for lead.
X-RES is a good looking electric glider and flies great and we await some good days to put her through a few competitions. It took me a lot longer to build than I had hoped but we got there.

Fast shipping to the US. Great service.