Latest Snipe 2 version - lighter and stronger than previously and compatible with the previous versions of the Snipe.

Includes the fin and rudder only, not the tailplane/horizontal stabiliser/elevator as shown in the photo.

Usual excellent service from Neil.
Dispatched within minutes of the order, thank you 😊

I thought I had the horn well bonded into the rudder of my Blaster 3.5, knowing this joint would be under a lot of launch strain. I was mistaken, as after several months' flying (weather permitting) the horn ripped out on a fairly average launch and the rudder, being spring-loaded, snapped to the left as far as the spring would take it. Fortunately there was no other damage, in spite of the glider hitting the ground quite hard after some wildly alarming gyrations.
The very thin section of the rudder does not offer much 'grab' area for the horn, so rather than use CA this time I opted for Uhu Endfest 300 epoxy - and they don't come much stronger than that (but it does take 24 hours to set). I made sure that the base of the horn was contacting the inner opposite skin of the rudder before applying glue to both the horn and inside the slot, finishing with a light fillet of glue top and bottom on the outside.
A little heavier than CA, of course, but more of a psychological penalty than anything over such a tiny area, and too small to make any noticeable difference to the CG - and surely worth it for peace of mind.
I wonder if other Snipe/Blaster 3.5 owners have had rudder horn separations?

Snipe and Blaster 3.5 fin and rudder

With a second Blaster 2 that has been waiting for several years to be built, I began to wonder how it might benefit from a Snipe and Blaster 3.5 tailplane, fin and rudder.
With Neil's customary superb service, the parts arrived the day after I ordered them, together with a tailplane mount and pull wire control runs. As the fin is asymmetric, I needed to rework the fin cut-out on the boom, but this was not difficult, while the rest of the conversion - with some forethought - was straightforward.
The model turned out to be a little lighter than a standard B2 and the first flights proved to be quite a revelation. I have been flying a B2 for about seven years, latterly with the smaller B3 tailplane, and am very familiar with its satisfying performance and forgiving characteristics. It's early days yet, and there's still some final trimming to be done, but launch height is superior to the B2 and the performance is much livelier, with a greater speed range and response to lift. I sense that good things are to come.
This has been a very worthwhile upgrade, and if you want to give your B2 a new lease of life, this is a satisfying way to go.
Even before I completed this model I ordered a B3.5 to complete my long-standing love affair with the Blaster, and the results on my modded B2 make me glad that I did. 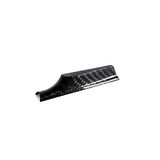 DLG Tailplane Mount
Price: $14.93
Out of stock, notify me when back in stock 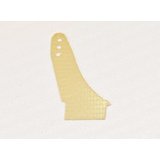 Snipe Rudder Horn
Price: $2.87
Out of stock, notify me when back in stock