In preparation for the 2017 F3K World Championship Vladimir’s Models made a batch of experimental Snipe DLGs with 1 degree more wing incidence. This resulted in the horizontal stabiliser being lifted up on 25 mm (1”) in flight, reducing the airstream’s influence on the tailplane. Also the rigidity and stiffness of the control system were increased, giving more precise control and even higher flutter resistance. These models were successfully used by Cederic Duss (World Cup 2017, Eurotour 2017 winner), Igor Butseroga (2nd Place in F3K World Championship 2017), and the F3K teams from Austria, New Zealand, Ukraine, Italy and South Africa.

The Snipe 2 is a further development of these improved competition models with a more streamlined and very much toughened fuselage.

The significant decrease in wing wake’s influence on the tail group improved the laminar flow on the tail surfaces and improved the Snipe 2’s control response, especially in turbulent conditions and when in strong lift. This allows the centre of gravity to be moved back 5 mm without compromising the handling or stability. This more rearward CG position decreased the required decalage (wing-stabiliser angle) also reducing aerodynamic drag.

The new thinner and more streamline Snipe 2 fuselage and stiffer wing construction is instrumental further drag reduction, giving higher launches. But above all these changes allow the Snipe 2 to climb better in thermals with smaller circles and giving clearer displays about the left and sink, so the model can be centred more quickly and reliably.

Vladimir’s Models have significantly increased the stiffness of all parts of the model to get the highest launch:

The rigidity of the fuselage is increased by 65% in relation to Snipe and Snipe SN. This has been achieved by using a wider tailboom made from Ultra High Module Carboline prepreg.

Snipe 2 has stiffer carbon aileron pushrods with ball links resulting in zero free play (no slop). The aileron horn has an extra shaft combined with the aileron hinge. This minimizes free play and compliance in the hinge and also greatly increases the rigidity of the ailerons’ control system. Snipe 2 has tougher torsion springs and steel control cable in pull-spring tail control system.

Joe Wurts worked over many years to design the aerodynamics for a perfect DLG wing and came to the conclusion that thin profiles are needed, especially for the rear aileron part of the section. Structural analysis showed that hollow molded sandwich construction was not rigid enough and a completely new solution was required. 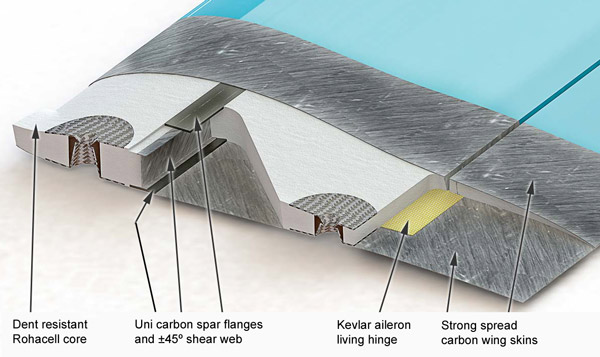 Working with Vladimir’s Models, Joe and Vladimir worked out how to integrate a carbon I-web spar into a solid Rohacell core. The spar/shear web significantly increases the wing rigidity and protects against spar delamination during the high launch loading. The other integrated shear web closes the aileron leading edge and makes the very thin aileron extremely rigid. All Rohacell cores are CNC cut from a specially sourced ultralight formula of Rohacell which is not available to other manufacturers. 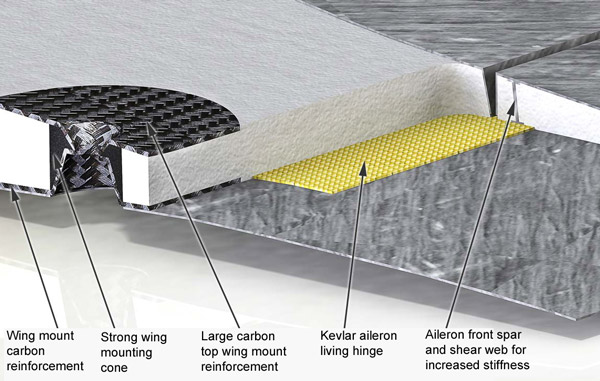 The Snipe 2 is available in four wing layups:

For expert pilots Vladimir’s Models developed a new Ultra High Module wing for the Snipe 2 UHM. The wing of this version only weighs 102-108g, however, the rigidity is 20% higher than the wing of Snipe 2 Regular.

Finally, the Snipe 2 Light UHM shares the light weight of earlier Snipe models with the improved construction of the latest wings to create an incredibly light and rigid wing that can be launched very high and will out float the competition on light air days.

A 2 piece wing is also available as an option. This asymetrically split to the right of the centreline version adds only 6 grams to the weight, and makes transporting the model much more convenent - especially by air. This option is only recommended for right handed launchers. Also note the two piece wing model is shipped in a smaller box, reducing the delivery cost. This may make it the more economical option for many customers.

We will endevour to stock all these layup options but if we do not please email us - we are delighted to special order models for customers.

The Snipe has the advantage in all phases of flight: it's very light weight and low drag allow pilots to throw the model to amazing altitudes with little exertion, the JW airfoil and light weight results in a great rate of climb even in weak thermals, and the clean aerodynamic design and internal aileron linkages give an extremely good L/D and the ability to return home from long distances downwind. The combination of outstanding launch height and an exceptionally low sink rate gives great still air duration. Even at its low weight the Snipe can cope with average wind speeds well, however 30 g, 60 g or 85 g ballast pieces can be fitted internally, allowing the model to be flown in winds up to the FAI limit with confidence.

Vladimir's Models now supplies Snipe 2 models with wing, tail and fuselage bags, so these are now included in the base price. No need to order wings bags separately.

For more info about the model see this RCGroups Snipe 2 thread. Also please click on the More Details links below to check out the kit contents and build manual.

I now have 230+ hours on the S2, many contests and lots of flying. I have had a mid-air, hit trees and lost orientation where the plane ended up about three inches straight in like a lawn dart. I have been able to keep in the air with minor fixes for all of these mishaps with no new parts needed. Very well built plane that will hold up to the real life of a contest plane.
Mike

Service from Hyperflight was excellent as always. The kit was packed securely and delivered within a few days of ordering. I also ordered a couple of items which proved unsuitable and which Neil promptly exchanged for better choices - I should have talked to him first.
The kit was complete down to the smallest detail, like the Kevlar thread to bind the throwing peg. If this is your first or second build, I strongly recommend you access the build instructions on Vladimir's website, and then dry-fit and double check before applying cyano. It's not difficult, but a little forethought will prevent errors. I used KST 08 lugless servos and a 300Mhr battery which gave me a CG of 66mm with no ballast required. Total weight was 224 gm. I applaud the inclusion in the kit of a set of Snipe wing tail and fuselage covers. Unprotected carbon surfaces are easily damaged. I look forward to some decent flying weather.

having been flying a Blaster2 for about a year, I decided to have anew DLG for this year, Snipe 2 was a nervous choice, mainly because of cost, but I ordered one anyway, the same excellent service from Neil, next day delivery of my kit in a box so strong you could bury your granny in it !! what a fantastic kit this is , fit and finish 2nd too none , assembly is the usual plan before gluing or cutting; the only fiddly bit is the aileron horn too pushrod fitting, 3 hands would be useful as you need to hold the wing in position and screw the ball socket to the hinge from under the fuselage, cross threads would be easy to do ! all assembled and C of G set at 66mm back, test flight beckons , slightly nervous I javelin launched my Snipe away into a gentle head wind ,WOW ! it flew away straight ahead for what seemed ages before a gentle landing , I did test a couple more times, before doing a gentle discus launch , I need not to have worried she sailed skyward at an incredible rate ,so smooth and responsive in flight , this model is on another level , REALLY worth the cost, every flight is magic ,,

It is a light aircraft that is good

Flew for the first time today. This is my first competition level DLG. The build was not too hard but there should be a good time allowance set aside to build it unless you have done a few planes like this. The only real nit was getting a battery that would fit, I made a 200mA 2S that fits in front of the servos. Had just over an hour on both batteries but with all the new stuff to me going on I did not look at the voltage before I took them out. The low volt warning did not go off though.
AUW came out to 226g.
I liked flying it as much as I thought I would--great fun to fly-- now to get ready for my first F3K meet.

There is only one word to describe the Snipe 2: stunning - yet even that barely does justice to the sheer beauty and impeccable fit and finish of this glider, which is surely the Rolls-Royce of DLGs. I have been flying Vladimir’s Models for about 10 years and have always been impressed by their design, faultless production and superb performance. But the sight of this thing took my breath away.

There is plenty of information on Hyperflight’s and Vladimir’s sites on the differences between this and the original Snipe, differences that are confined to the fuselage and control linkages, yet I feel the Snipe 2 is greater than the sum of these changes. The fuselage is a completely new design that is much stiffer, very sleek and slender, and the interface with the fin has a greater gluing area with the result that everything aligns perfectly without need for adjustment.

Although I haven’t started work on my Snipe 2 yet, I have given some thought to the installation of the gear - and some thought and foresight are needed here, for due to the very slim nosecone things will not fit quite so easily as on the original Snipe. Although there appears to be plenty of space, if the battery, four servos and receiver are installed in-line there is a strong likelihood that the battery will slightly snag the front of the nosecone (at least, all the batteries of adequate capacity that I know of). I don’t like the thought of that. I have seen a photo on a forum of a very neat installation, but the front edges of the battery project beyond the width of the fuselage. Contact with the nosecone is surely inevitable. However, I found the answer from a pic on Vladimir’s site: mount the rx inverted on top of the rearmost servo, and this is an example I will follow.

I shall be using 4 x MKS HV75K-N servos, 1S or 2S battery, and a Storm S603 rx. Although suspiciously cheap, I now use the S603 on all my gliders. They have all performed faultlessly and have a huge range.

As I said on my review of the original Snipe, no ever regretted buying the best. With the Snipe 2, to coin a well-used phrase, the best just got better. 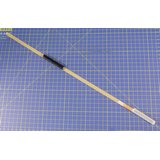 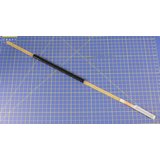 Snipe & Snipe 2 Setup Template
Price: $12.34
Out of stock, notify me when back in stock