Electric fuselage kit for the Purito. Includes the electric pod, the tailboom, the tailplane mount and the fin. Does not include the wing or tailplane.

We also designed an electric fuselage for our Purito, which is called the Purito-E. It was important to us that both the wing and the tail unit of the glider version could be used for our new electric fuse.

The electric fuse is a new design, which has been widened for the required components and adjusted in length. This means that the fuse pod is 10g lighter than the glider pod (weight of the electric fuse pod 35g). This electric fuse is designed for a Hacker A10 motor with small Maxon gearbox, but other motors of the same type can also be used. We will test the following components in the next few days: Vladimir’s Model VM PRO Spinner 30/3 set and as propellers the VM PRO Prop 11/7, 12/8, and 13/9. Planned take-off weight Purito-E: 450g.


** This motor will need a small widening of the internal fuse space to fit. 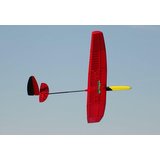