We have received a consignment of Pulsar Pro 4 Compact eSoarers. These have improved aerodynamics and structure over previous models and can be broken down into components, giving a maximum box length of approx 100 cm . The main changes are:

This model is very easy to fly, with good performance and excellent handling. It is more relaxing than an all molded model, yet will be just as efficient in wind speeds up to about 12 mph.

Very smooth in the air. Delicate to the touch and gentle on your mind.
Do not take a call from your wife if she calls when you are on the field. It is not a good idea off course. But in light winds and if you sense urgency on her behalf you could easily pick up the call and still feel comfortable with the Pulsar up there soaring.
Thank You Neil. Good service.

The 4m Pulsar arrived today. What a beautiful model. Everything is perfect on this model. I like the carbon D-Box better than the Kevlar/carbon as it is smoother.
Makes my other Pulsars look a bit faded, but that's fine as I have six years on one and 8 years on the other. Expect to get the same service from the 4m Pulsar.
Many thanks,
John

The 4m Pulsar arrived in Canada today. What a beautiful model. Everything is perfect on this model. I like the carbon D-Box better than the Kevlar/carbon as it is smoother.

Makes my other Pulsars look a bit faded, but that's fine as I have six years on one and 8 years on the other. Expect to get the same service from the 4m Pulsar.

Fantastic glider. Well built and easy to install servos, engine etc. There is a lot of space in the body for ballast and what you can find in it. Is easy to fly and easy to read in the air. Have just flown a single day with it where it almost did not blow, and it just does not want to come down from the sky. I am excited to try it under more windy conditions, with ballst in. A nice detail is that you can pack the plane down to the maximum of 1 meter in the lumbar. This, however, requires that you spend some time collecting the plane before flying, but when you have a small car, it's nice that it does not fill up so much during transport. However, it would be good if Hyperfligth would be so kind to put the right pictures on the website so you can see how the flight looks. The pictures on the page now are the old version.

I had Heigh hopes for Pusar Pro this year, sadly the weather caused alsorts of problems, Pusar was not producing that extra bit of 'Magic' I was hoping for?

2015 Season finished, we were up the field just enjoying some flying for its own sake, I was still frustrated by the AVA's edge over Pulsar Pro. Eight flights and I could not get that extra bit out of here . . . fly for fun and we still have a competitive spirit at our field.

Last fligh, then home, I was looking closly at the ailerons, were they slightly up? . . . It was a tiny amount but with a tad of adjustment on sub trim. That Last flight was a dream, best flight of the day.

A few days later, same senario, all retired 'old farts' out flying for a bit of fun. Excelent weather, I had moved the ailerons it was now obvious the flaps needed re triming.

The whole day, 8 flights, all were 10 or 10 minutes plus, keeping the Avas' honest. Pulsars flying has improved dramaticaly,

The potential I thought was evident has finaly shown itself. Perhaps my falt for not looking closley enough at the control surface line up, but we are talking of very tiny amounts that my old eyes had trouble seeing.

Whatch the wing control surface line up, they are critical, get it right and she is satisfying and a pleasure to fly.

The construction of Pulsar Pro 4e was streight forward enough . . . It turnes out the flying was equaly easy.

The weather was not perfect for 4m maiden flight tests with 10-12mph wind gusting to 14mph, but the sun was out, all the glider buffs were at the field, it had to be did'nt it?

Much fidling and faffing, coffee drinking, sandwiches and yacking, a couple of scares when servos did not work. I had checked this all over and over the night before, my falt, wires round the wring way and a brocken JR plug pin retaining lug, fortunaly I had a spare plug.

I enlisted the help of mate Russell to double check my bouble checking. Finaly we were ready, a glide across the field, if she went streight(ish?) then power on and away. Streight . . . so power on, pop! the prop and spinner flew off and Pulsar landed the other side of the patch very nicely. The one thing I had not check was the tightnes of the spinner, Doh . . .

Second time, we were happy that she was flyable from the previous performance, so half power, launch, a slight turn to the left but other than that uneventfull.

Majour problem, the ailerons did not respond to well . . . rudder needed, should have rememberd that from the Pulsar 3.6m. OK, a little fiddle see how the trim was, not so bad, but a little dificult to keep in a strieght line. Land, that was a suprise, a lot easier than I had expected, the pedegre was showing, and the fact that I had added Eleator/flap mix on a switch as per Pulsar 3.6.

I added 40% rudder/aleron mix and moved the battery forward, she was already at the most forward recomendation of 95mm from the LE.

Pulsar 4e's basic handling was excelent, giving confidence. We finaly came to a trime that, although not 100% perfect, is good enough to move on to the fine tuning of competition flight which takes time and patience.

Russel and I have experiance of a number of good gliders, including Kappa 35, Ava's (verious) Avalon, Pulsa 3.6, Shadow, to name a few. Our conclusion, Pulsar Pro 4e, is a worth mark to include with the best. Her ability to indicate lift, easpecialy at low altitude I think is the best I have experianced? She is forgiving but not soft, rewarding good piloting with excellent performance.

I'm looking forward to the next session, fine tuning Pulsar, there is an F5J comp on the 31st May close by. Depending on the weather, I will have three models to choose from, Ava 4m, Avalon 3.6 and now Pulsar Pro 4e. I need lots of flying hours, one of the advantages of being retired.

Definatly worth five stars as a quality flying machine . . .

I have been flying a Pulsar 3.6 (MkI) for 12 months, it was my first 3m+ e-glider. I was impressed with the quality and its flying ability. Since that first encounter I have become bitten by the 12ft bug!

Always wondered about the 4e Pulsar Pro eversince viewing some impresive footage on uTube, 'you cant do that with a 4m open structure e-glider'?

So when I saw Neil had some in stock I could not resist, selling on my beloved 3.6 Pulsar to a fellow club member who has been wanting to make the move into the 'twelve foot club', he wont be disapointed.

As one has come to expect frome Hyperflight, delivery was quick, carrier information was spot on, the model was well packed, it always takes an hour or so to get through the quality packing! . . . no, I'm not complaining.

Pulsar 4e is awork of art, the attention to detail is amazing. Haveing assembled the 3.6 MkI last year, one could apreciate production standards have been 'refined'. A few design changes to Pulsar 4e were welcome compared with the original too.

A factor that has always bugged me is the need in many cases to use motor/gearbox power instalation . . . more expense, more complication, I and a friend have both had gearbox failures recently! A factor that influenced me on the original Pulsar 3.6, it had a decent size 40+mm spinner ring, which alows a direct drive 35mm out runner to be instaled.

I have used the new 'Turnigy in-runner/out-runner Glider Drive' range of motors, experimenting with the diferent 'K' ratings and the amount of front tapper in relation to the slightly tubby overal 38mm diamiter. They are powerfull, tough!!! have all the practical advantages of an in-runner and run like sewing machines, its just that 38mm OD that is an issue?

Pulsar Pro 4e has a 38mm OD spiner ring, with obviouse internal restriction, would it be a problem? What the hell, if it is a problem I can trim the nose back a few mm and reinstal a new motor mount. Not a problem, just a little clean up with the Dremal internaly at the back of the firewall and a snug fit was achived.

The fusalarge is a 2.4 friendly, Kevlar moulding with only carbon towe around the cockpit opening which is 40mm wide, giving stackes of room for the power train. The cockpit cover its self is carbon, a slightly 'slack fit' on the retaining pips.

The wings are amazing, how they do it I dont know, I can sit for ages and simply look and wonder. Servo instalation is simplicity itself, old fashoned external pushrods to exposed horns. I am not convinced at the speeds we fly at, that this is a real dreaw back compared with the compsite molded faired and complicated arangments on offere? It is certainly easier to adjust, tweek and repair.

The wing tips are an excelent fit into the center pannel, however I have one complaint . . . more of a disapointment? One of the center pannel endplates was poorly fitted to the carbon-kevlar 'D' box. Rough edges and a 1.5mm gap at the LE, I could have sent it back, but decided to work on it instead. Super glue, a file and some epoxy/micro baloon mix had things sorted, but this has put my rating down to 4 stars.

The tail and fixings are a much better job than the previous MkI, with all flying horizontal stabalizer mounted on a 'V' suport. The fin is nicly constructed and provision is made for two servos, I seem to remember modifying the fin/tail setup 12 months ago. The carbon boom is a nice fit to the pod, although I have used one wrap of 10mm masking tape to make it a perfect fit!

A second disapointment is that there is no indication of the decalarge mesurement from the center of the tail LE to the top of the boom . . . ? Not vital I supose but it would make setting up a little easier, another reason for 4 stars.

All I have to do is make up a wiring loom and wait for some sutable teasting weather?

Despite my couple of negative coments, the wing issue is probaly a one off, Pulsar Pro 4e was impresive from the time she came out of the box to now sitting on the bench waiting to fly. There is no doubt the extra half meter does the dusines visualy.

Watch this space for a flying review

Pulsar is my Star!

Twelve months since I purchased my Pulsar Pro 4e.----- It came well boxed as you would expect from Hyperflight with no transport damage.
Well built and easy to assemble I would not hesitate to get another for e'soaring if the need arises. I now fly it in preference to my hyper AVA and it has proved to be the next step up in soaring.
Very stable as you would expect from a wing of this type and yet nicely responsive to the Ailerons and shows lift well.
A very happy flyer and looking forward to the new competition season 2015. Hate to let the secret out about this cracking aircraft. Ian. 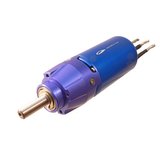 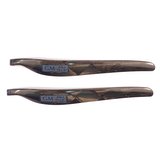 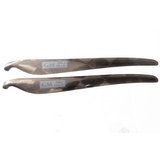 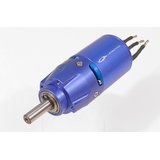