This model requires a little construction and does not include the RC transmitter and receiver. It is not suitable for a beginner, and some thought will be required to get everything to fit in the limited pod space. We are not aware of any Sprektrum receiver that will fit. The models comes with a complete accessory pack and servo trays designed for KST X06, Blue Bird BMS-101DMG, Blue Bird BMS-101HV, Ripmax SD100, Help H47 or Dymond D47 servos. No other servo will fit easily.

The one piece wing uses free flight type construction techniques, to maximise strength and stiffness, and minimise weight. The wing’s front part is a beautifully molded carbon Dbox for good torsional strength and excellent aerodynamics. The substantial spar is made from carbon spar caps with vertical grain balsa shear webs. The balsa ribs are connected to the thin carbon trailing edge using carbon capstrips, and aft of the spar is covered with film.

The pod and boom fuselage uses attractive plastic moldings for the pod and removable nosecone. These are an excellent fit and follow the wing underside contour for a gap free fit. The tailboom is a tapered wrapped carbon tube with a pre-cut slot for the fin, and a flattened front section for mounting the R/C equipment. The fin is made from rigid foam with carbon spars and has smooth vac-bagged glass covering, and incorporates the rudder with a very free living hinge. The foam/carbon/glass tailplane has a separate elevator and is mounted above the boom using a tiny standoffs to minimise interference drag . All pushrods and accessories are included, only the R/C gear and minimal building equipment is required.

An instruction manual is not available but there is some useful info on the manufacturer’s website. Please don't try to order direct from VM, they will refer you back to us.

The model is suitable for use with 2S LiPo batteries only (not 3S or you may fry the RC) with capacities between 175 mAh and 350mAh. Our HyperLiPo 2S 300 mAh LiPo battery fits fine under the wing and some customers have managed to squeeze it in behind the motor, negating the need to extend the battery lead that would otherwise be required. Unless you are an RC god please use HyperFlight’s recommended forward CG, not VM’s very rearward and unstable one.

The speed control has been modified to optionally output 5V or unregulated 2S LiPo battery voltage to the receiver and thus servos. As supplied the ESC outputs the unregulated 2S Lipo battery voltage (approx 8.2V initially unloaded). This is good when using high voltage servos, and especially if using receiver voltage telemetry, as you can see/hear the battery voltage on the transmitter. On the other hand if you are using normal voltage servos you will need to extricate the wire marked 8.4V and insert the wire marked 5V into the RC plug.

The supplied ESC will overheat if full power is used for more than approx 5 seconds. We recommend that the throttle channel travel is reduced to 60% on the transmitter to limit the current and avoid overheating. We found that a throttle -> down elevator mix was required to give straight climbs.

THE POWERSET AND WING BAGS ARE SUPPLIED WITH THE MODEL AND INCLUDED IN THE PRICE SHOWN.

Review by: Peter b

Certainly a feat of design/packaging
First flights were disappointing with the cg as recommended and the battery in the recess under the wing. I found it uncontrollable under power and too pitch sensitive in the glide which could easily be my incompetence of course.
However shoe-horning the battery under the hatch in the nose has transformed everything. It now regularly out thermals the local red kites, much to their annoyance

This is an absolutely stunning model in both looks and flight characteristics. It can stay afloat in the mildest of updrafts while the tiny motor feels almost non-existent but gives you the assurance of getting the Elf to height while providing a large safety margin when in difficulties. I am currently using a 300mAh pack which has used up about 1/3 of its capacity in three climbs. If you are using Frsky I highly recommend the G-RX6 receiver and program a reliable RX battery low voltage warning such as this one: https://oscarliang.com/taranis-logical-switches-voltage-alarm/
The only point for improvement is in the build where the pushrods are pre-built and not the exact required length. I rebuild the rudder pushrod and adjusted the servo tray position for the elevator pushrod as it is more difficult to access. Other than that the build quality is superb.

I already have an Elf DLG and have found with a wing loading of 2.6 oz/sq. ft and being a small model you can take all sorts of liberties, and it remains undamaged if you get it wrong. It also flies superbly - if fact I would say that it’s in a league of its own.

I don’t know if writing this review for the electric version that I since purchased will serve any purpose as the batch sold like hot cakes – I guess Neil will be getting in some more!

The ELF electric was easier to put together than the glider version - I opted for the Ripmax SD100 servo’s which fit directly using the supplied mount and the made up power set up – all done in an evening even at my slow rate.

Running the model up revealed a very healthy power to weight ratio – it would prop hang on ½ throttle. However this didn’t prepare me for the rate of climb in flight – straight up at about 1000’ /min and virtually silent. Also being a little heavier didn’t seem to effect the flight characteristics compared with the glider version. Where the electric version really scores is that you can easily explore all the little features of your flying field searching for lift. Also if you thermal far downwind you can get back. Additionally being rudder/elevator with generous dihedral if you lose orientation upwind you just center the sticks and fly the dot back – great practice as insurance for larger models as well.

Delivery and packing was the 'usual' Hyperflight standard - top quality box doubles for storage/transit and ordered mid-morning and arrived lunchtime the next day with on-line tracking all the way and bullet proof packing.

All in all a great model – just the thing for a quick flying session on the local little used football field on a thermic day when you’re suffering from ‘itchy finger’s’. Best to buy 2 Lipo’s though as it seems to run them down quite quickly.

n.b. Add a mix of throttle to down elevator so it tracks straight on high power and use half power for the first launch until you’re used to it zooming up.

Recently purchased and have now completed the model, though not yet flown. The kit quality is superb and goes together as you would expect from a Vladimir’s model. The only anomaly for me was setting the CoG. There was a discrepancy between what Hyperflight said and what was recommended by Vladimir. Turns out after reading another review that the Hyperflight was the best option. The model arrived well packaged in a sturdy cardboard box with all accessories well secured to prevent them from breaking loose in transit. The service received was excellent.

This is the brilliant little e-soarer that many of us hoped for but probably thought would never happen: after all, there is not much in the way of real estate in that tiny Elf pod to accommodate a motor, ESC, two servos, RX and battery. But Vladimir has shown that it can be done - and with spectacular results.

It goes almost without saying that my model arrived very quickly and securely packed by Neil in a sturdy box. A pair of high quality wing bags is included.

At first sight you wonder how everything is going to fit in the available pod-space.The tiny Sunnysky power unit housed entirely within the spinner is a miniature work of art, and I found that as long as you use SD100 servos for the dedicated mounting block, building this little glider is straightforward, if a little tight. But choice of RX is crucial, and I went for a FrSky X4R - not least because the pins are horizontal: vertical pins would be a very tight, if not impossible, fit and might require some modification as the only practical space to mount it is on top of the elevator servo. And when bolting the motor assembly into place it is important to use the supplied spacer: there is a danger that the bolts, although short, could damage the motor without this.

Carbon pushrods for rudder and elevator are factory-installed and terminated at both ends, and provided the SD100 arms are positioned as per Vladimir's website, everything will line up perfectly.

A HyperLipo 2S 300mah battery fits neatly under the wing but, as Neil suggests, the lead will need lengthening a little so that it extends to the hatch for easy connection to the ESC. Removing the battery every time it needs charging would be a bit of a pain, as the lead would have to be threaded back past the servos, which is a little fiddly - in any case, on models of this size I like to leave the wings permanently bolted on. But with the battery in situ a longer balance lead is needed, so I cut a slot in the pod under the wing so that the standard short lead protrudes and can then be hooked up to a Molex extension for charging. OK, a tiny drag penalty - though outweighed, I feel, by the ease of charging. And, to my mind, this is a go-anywhere glider where the emphasis is on fun.

I was very happy with the build, but when the moment came for the first unpowered test glide I was in for a shock. Having checked that the wing and tailplane were seated correctly and the elevator was at neutral, I initially set the CG half way between the previously suggested 74 and 80mm limits. Unfortunately, this meant adding 3gm of weight to the tail, which rather offended my sensibilities, but there was no option - or so I thought...

I had expected a nice flat glide, but instead the Elf immediately reared up vertically into a violent stall and nosedived into the ground. I have heard that Vladimir favours a rearward CG, and so do I on some models, but there was no way my Elf was going to fly on that setting. I removed all the tail weight, checked the CG, which was now 10mm more forward at 67mm, and tried again - gingerly. Result: a long and flat textbook glide. Perfect - no nose or tail weight needed, which is what I had hoped for. I gave her a couple of seconds of power and she went up like a rocket, but high winds have so far prevented any further sessions. It may be that I can move the CG a little further aft as I get know the model, but so far all is looking good. But as for 80mm, I don't think that's for me somehow.

I can't wait to get in some serious flying time with this little miracle, having already had so much fun with the Elf DLG. I found it a pleasure to assemble, as I do with all Vlad's models, which to my mind are in a league of their own in design, execution and performance. My only caveats on the Elf-Pro Electric are: be careful with the choice of RX and please start off with a forward CG! 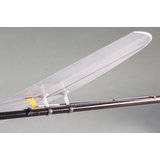 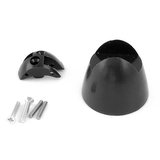 Elf Pro Electric Upgrade Kit including powertrain
Price: $151.56
Out of stock, notify me when back in stock