The Vladimir's Models AVA Pro is a wonderfully stable thermal duration (TD) model suitable for near beginners and competition fliers alike, and the simple rudder, elevator, spoiler controls make it supremely easy to fly. Its light weight, prodigious strength, and state of the art design result in unequalled performance.

The AVA Pro is an improved version of the world renowned AVA. Probably no rudder-elevator-spoiler (RES) glider has a better reputation and a more illustrious contest record than the AVA, so improving this already superb model is no mean feat. However Vladimir has incorporated these very significant upgrades in the AVA Pro:

- The AVA Pro wing planform has been optimised to be more elliptical, and the construction of the tip panels improved to utilise a carbon D-box to be stiffer and stronger. The better adherence to the airfoil profile also gives a useful drag reduction.

History
The AVA Pro is an evolutionary improvement of the AVA, which was itself based on the revolutionary Bubble Dancer designed by Dr Mark Drela. The AVA was an implementation of Mark Drela’s design using the free flight type construction techniques invented in Eastern Europe, and perfected by Vladimir. Like the Simply the Best and Organic ranges the AVA Pro wing has carbon capped ribs and a Kevlar D box. Allied to a substantial Kevlar wrapped carbon spar this results in a very rigid and almost unbreakable structure.

The aerodynamics are outstanding, utilising specially designed airfoils (no doubt in Xfoil, written by Mark Drela himself when he was a student), and a low drag V mounted tail plane, the AVA has a measured sink rate of 0.3m/s (60 ft per minute). The AVA Pro glider can be built down to 41.3oz, however despite the low wing loading the plane can cope with 15mph winds with ease. 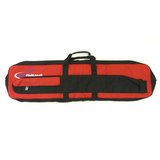 Vladimir's Models Wing and Tail Bags for the AVA Pro
Price: $64.74
Out of stock, notify me when back in stock