The HyperLipo 2S 175 mAh LiPo is a small battery suitable for the Elf mini discus launched glider, and other very lightweight models. Comes with a Mini JST (also called BEC) power connector plug and a JST-HX balance plug. Connect via a Mini JST convertor lead if using 2S capable receiver and servos, or through a small voltage regulator if using RC limited to 5V.

The product replaces the Elf 2S 180 mAh LiPo which was a little larger, and some customers found difficult to squeeze inside an Elf.

This battery works very well with the many modern RC components that work directly with 8.4V (2S) battery supplies. We get at least 2.5 hours of flying time on our test Elf, fitted with a Jeti Duplex R5 receiver, two SD100 servos, and a Jeti Vario sensor. The very small loads on the servo mean that the battery's small capacity is ample for this model. All these components worked fine on the 2S unregulated battery.

We use a Jeti Box on the transmitter to check the receiver battery voltage - stop flying when the receiver voltage goes down to 7V. Charge at 100 mA - 200 mA (max) using a suitable LiPo charger.

Due to a new restriction on posting batteries we cannot mail loose LiPo batteries by air. Also within the UK all LiPos have to be sent by courier, which adds to the delivery cost.

Europe
Mainland Belgium, France, Germany, Italy, Nethlands, Spain
Can usually be sent by road-only courier at extra cost.
Other EU/EFTA COUNTRIES NOT AVAILABLE. We cannot ship LiPo batteries to Switzerald, Denmark or other European countries as these may be sent by air.

Rest of the World
NOT AVAILABLE. Note we cannot ship LiPo batteries anywhere out of the EU.

Bought as a backup for my Elf. Good physical fit in the nosecone, great little packs!

A perfect fit for the Elf DLG and quick delivery from Hyperflight.

Good for your ‘elf!

Super little 2S, running super little SD100’s, in a super little Elf. Battery at 3.7v per cell after 1.5hrs flight in buffety conditions! Ensure to mount square so as not to foul the nose cone. I didn’t and had to live with a 1mm gap between cone and body joint. Good online ordering/ dispatch service with neat packaging. Thanks Neil.

This batter just fits in the front of the elf. It's a tight fit though. I took the blue cover off it to save a gram and to make the fit easier.

Good battery for the Elf

I bought this battery for the Elf DLG and it is just about perfect. A bit of a squeeze but the battery fitted into the nose cone without removing the balance plug after I shortened the leads to the main connector so it could lie under the servos. I charge it on the 150mAh setting as none of my balance chargers have a 175 setting.

Good as an alternative

Does what it said on the label, nothing more nothing less. Was a millimeter too wide for my Elf nosecone and the sharp corners slightly deformed the nosecone when in place (and yes the battery was as far back as possible. A good battery for the price but my recommendation would be to break the piggy bank and go for a Smart LiPo - you won't regret it.

Bought this for my Elf after my SmartLipo starting giving me poor flight times of <30 minutes before beeping.

I stripped off the heatshrink, unsoldered the connectors and soldered my own connector onto a short flying lead, epoxying it to the non-tab end of the battery. I then epoxied a mating connector to the top of one of the servos in the Elf avionics bay, allowing me to plug-in and un-plug the battery with ease, and without fiddling with any wires.

The battery seems to be performing very well, and based on the flight times I've had so far, I should get around 1h30m to 2 hours per charge. With the batteries this cheap, I bought two, which should give me plenty of flying time per session!

I'm using a FrSky FASST-compatible TFR4-B 4-channel micro receiver and two Ripmax SD100 servos - both of which can run directly off 2-cells.

Great for the Elf. Fits as is above but you can shave off 3 grams by taking off the cover and soldering a lighter connector on. (Not neccessary but it was fun!) 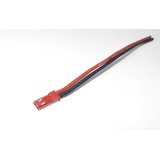 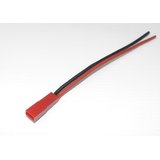 Mini JST (BEC) Socket with Lead
Price: $1.19
Out of stock, notify me when back in stock

Malibu Pro
Add
Price: $190.38
Out of stock
Available to pre-order

JST BEC Socket to RC Plug Convertor Adaptor
Price: $1.63
Out of stock, notify me when back in stock